The shooter can retrieve his or her own airball if the referee considers it to be a shot attempt. The release ends team control. It is not a violation for that player to start another dribble at that point. When an airborne player keeps control of an attempted shot that is blocked and is unable to release the ball and returns to the floor with it, that player has not traveled; it is a jump ball. If, in this situation, the shooter releases the ball, then this is simply a blocked shot and play continues.

A defensive player does not have to remain stationary to take a charge. A defender may turn away or duck to absorb contact, provided he or she has already established legal guarding position, which is both feet on the playing court and facing the opponent. The defender can always move backwards or sideways to maintain a legal guarding position and may even have one or both feet off the playing court when contact occurs. That player may legally rise vertically. If the defender is moving forward, then the contact is caused by the defender, which is a blocking foul. 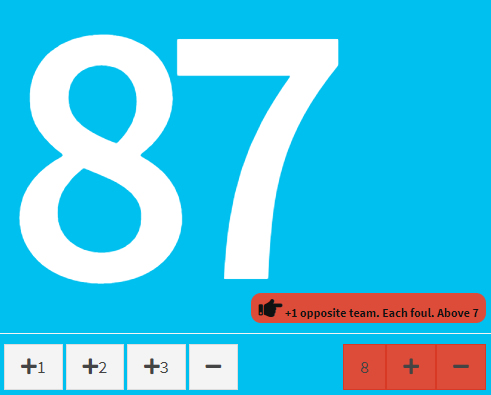 Any team who accumulates 7 or more fouls within the first or second half of the game will have reached the Team foul limit for that half. A single point will be awarded to the opposite team for each and every foul thereafter. Team fouls will be reset to zero at the end of the half.

Music will be stopped once a team has 7 or more fouls for the remainder of the half, this is to help clarify communication with the ref and players, also make players more aware. For games that are getting out of hand the ref will take possession on the ball on each and every foul from the side line for a few minutes or longer.

or "And 1" - when called by a ref or organiser, the offence is awarded an instant 1 point and possession. If team converts possession to scores it may result in a 5 to 6 point play. This is done as basketball613 does not officiate free throws. We keep the game moving.

Participation in sport and recreation, particularly at the community level, should be fun. Preventing and eliminating discrimination and harassment goes a long way to ensure enjoyment from participation.

Play by the Rules provides information and online training on discrimination, harassment and child protection to address inappropriate behaviour in sport. It is supported by the Australian Government and each State and Territory Government.