Every game a member wins, that basketball player gets 1 Victory Point. Players who accumulate enough win free games and merchandise. Such as the below basketball sport caps that can be won for 25 Victory Points: 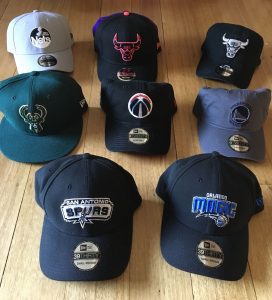 Above - 2019 batch of basketball caps

Some of the ones below may have been taken since publishing this post mid 2018.

The New Era Cap Company, located in Buffalo, New York, is an American headwear manufacturer. It was founded in 1920 by German immigrant Ehrhardt Koch. New Era is the exclusive manufacturer and marketer of the official on-field cap worn by every Major League Baseball team and their minor league affiliates, as well as select teams in the Korea Baseball Organization, Nippon Professional Baseball, and the Australian Baseball League, and maintains agreements with other licensed entities including the National Hockey League, National Basketball Association, National Rugby League, Big Bash League, Little League Baseball, and over 200 colleges and universities in the United States. New Era became the official on-field cap provider for the National Football League in April 2012. In October 2013, New Era became the National Lacrosse League’s official cap supplier. On May 12, 2014, New Era secured the rights to be the exclusive headwear provider for Turkish Airlines Euroleague Basketball.